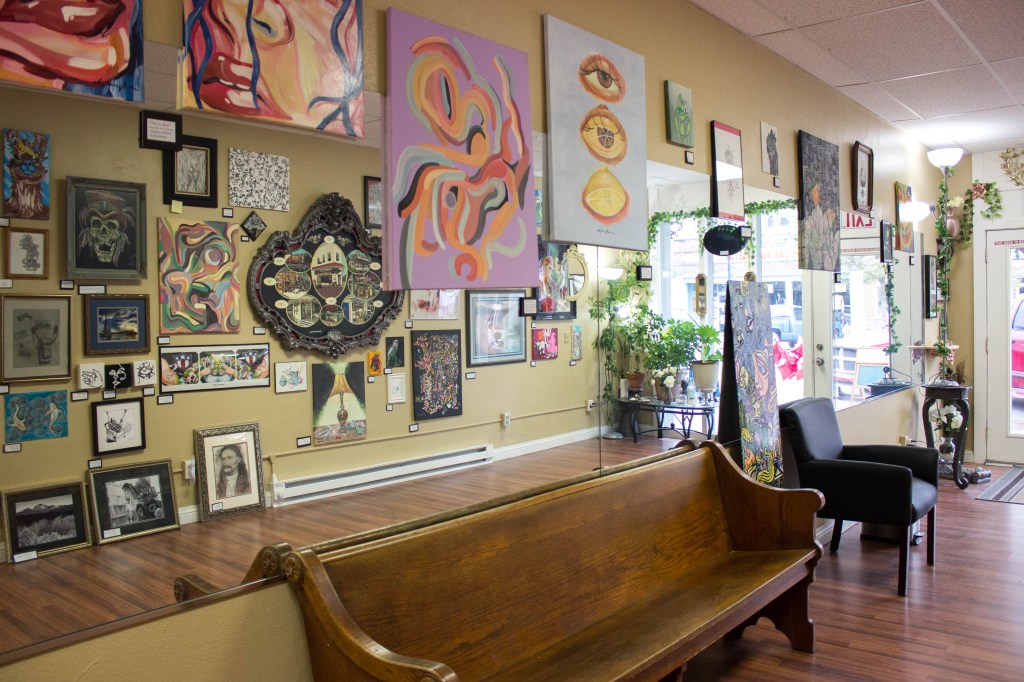 Colorado native Jesse Lee Vaughn saw the need for a space in Fort Morgan where local artists could show and sell their work. He knew he needed to bring another artistic endeavor to Main Street, especially one “for people who wouldn’t stumble upon a tattoo shop.”

Vaughn is the owner of Americana Custom Tattoo Parlor, a store he moved from Augusta, Georgia, in 2014. In Augusta, he had opened an art gallery across from his tattoo parlor, which he was missing when he returned to Fort Morgan. Vaughn ended up putting on a few art exhibitions outside of his home, but felt the city needed something more formal. He had the experience of the past, but just needed to find the right place to continue his business.

For years, Vaughn watched the empty storefront in front of Americana and finally decided to buy it. He took over 210 Main Street, turning the space into an art gallery called Moonworks. Vaughn ended up digging a hole between this space and the old barbershop when he recognized the need to expand, long before the opening the first weekend in August.

“I knew right away that I was going to run out of space, so I drilled a hole in the wall and bought the space next door,” Vaughn said. “Before we even opened, we had to develop ourselves. Now I know we’ll have room, hopefully, for about 20 artists.

In addition to the public gallery, Vaughn also ended up buying the space on the other side of Moonworks to use it as a private art studio, where he will spend more time creating his own artwork.

Vaughn is originally from northeast Colorado. He grew up in the Akron area, but ended up attending Fort Morgan High School for a few years. About seven years ago he decided to return to the area with his successful tattoo parlor.

As a self-proclaimed “born and raised artist”, there was never any question of Vaughn pursuing an artistic career. His first paid job offers were received at a young age, as he began designing corporate logos and flyers for local businesses… even painting his elementary school mural in sixth grade!

When he was older, friends would ask him to draw their tattoos, and he would always agree for a small price. However, he soon realized that the money was in the tattoo itself. Vaughn began an apprenticeship in tattooing, and the rest is history. He has been in the tattoo business for 25 years now. While still a lover of oil paintings, Vaughn wanted to bring some of his own pieces to Moonworks and provide the same opportunity to his employees at Americana, who now showcase all of their works in the gallery.

“People wouldn’t guess that I have top caliber artists working for me, which I always do,” Vaughn said, explaining the stigma that is often attached to the tattoo profession. “There are tattoo artists, and there are tattoo artists. I always hire artists who tattoo. Showing my team across the street (at Moonworks) is very rewarding. I can showcase the talent of my handpicked team there (in Americana) to the general public who may have never set foot in a tattoo shop or may not be aware of their caliber of talent.

Vaughn is also passionate about playing a role in improving the community, hoping to bring “a little more life to the city center,” an initiative that the people of Fort Morgan have expressed their support for. appreciation.

“I really enjoy helping my small downtown communities, if only to improve the frontage of the storefront. It was an opportunity to improve this block, the appearance of this area, ”said Vaughn. “It means a lot to have him alive and visually appealing. It’s bigger than me. It’s a community service that I love to do.

Vaughn plans to keep clients interested in the gallery with a frequent rotation of various works in addition to thematic exhibitions for certain events and holidays. The first thematic event will take place in September during the same week of the Fall Harvest Auto Show and will feature many automotive-related works. One of Vaughn’s favorite shows is the Halloween Show, where performers turn spooky ideas into creative masterpieces. For the Christmas season, Moonworks will be hosting a show throughout the month of December, which will be the perfect opportunity to find affordable works of art to give as a gift or keep for yourself. The show won’t have any Christmas-themed works, but instead will have all of the pieces on sale for $ 100 or less.

Vaughn also saw another unique opportunity: to create wares from some of the works of art. For example, a painting priced at $ 500 can only be purchased by one person for that specific amount. For those who aren’t able to spend hundreds of dollars on a painting, Moonworks will give people the option to purchase cheaper items like mugs, magnets, T-shirts, prints, and phone cases. with a copy of the desired work on it.

Vaughn also hopes to bring attention to the gallery simply through word of mouth. Since it was created both by locals and for locals, Vaughn hopes some of the patrons who buy artwork can meet the artist in person, which is extremely rare in large cities. He also hopes that artists from the region can meet to network and enjoy a like-minded company.

In fact, Vaughn first met Brigitte Shafer, the director of the gallery, years ago at one of the art exhibitions he held at his home. Because they were able to network, the two are now working together to run Moonworks. Shafer, an accomplished but humble professional artist, also has works on display in the gallery.

Currently, Moonworks is generally open on weekends, but official hours will be set in the future once the gallery is more established. Artworks can be viewed and purchased in person at 210 Main Street or online at moonworksartgallery.com. Artists who wish to contribute to the gallery by becoming members can email [email protected] for more information.