The coronavirus pandemic has brought the mask back into the public sphere, and in Mohamed Bassiouny’s Pandemic at the Easel and Camera Gallery on October 6, 50 paintings and sketches of varying sizes explore the phenomenon. Huge paintings showing key politicians and stars from various times in history wearing light blue masks and gloves. They include Mona Lisa, Frida Kahlo, Ahmed Zaki, and Kim Jong Un, among others.

This is Bassiouny’s third personal exhibition. Its precedent, held at the French Cultural Center and the Saad Zagloul Museum, focused on the human body, addressing gender and identity. Based in Kafr Al-Shiekh, where he runs his own business, the artist was born in Kuwait in 1979, and lived between Kuwait and Cairo until he decided to settle in the Delta. The artist obtained two degrees in painting from the Faculty of Art Education and in restoration from the Faculty of Archeology, which gave his paintings a degree of perfection.

Bassiouny is one of those contemporary artists who took inspiration from the pandemic, and he uses masks as a tool to hide the fear felt by the famous more than anything else. They are also a symbol of separation and prudence. Having caught and survived the Covid very early on, he believes that he has united the world’s population: “I would say that everyone is afraid, even the most powerful among us. The image of people wearing masks has become a universal symbol, like the outward sign of a new religion. “

Using acrylic, oil and ink, the works on display are both real and enigmatic. The artist’s expressionist realism is influenced by pop art. His palette is limitless, even if warmer colors prevail, counterbalanced by the blue of the masks and gloves. “I used to wear a mask to protect myself during my frequent visits to China, but I was still infected at the end of 2018 during a visit to Shanghai. This is how I became obsessed with the idea. The pandemic which stopped my activity forced me to stay longer in my workshop. I started this collection by drawing sketches of political leaders wearing masks. 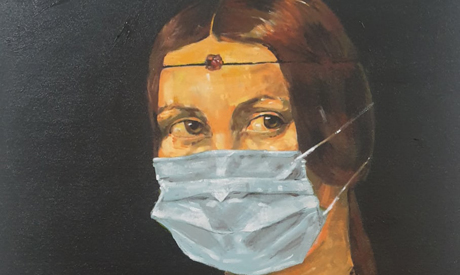 “I have been influenced by historical stories and paintings triggered by pandemics, namely the deadly Spanish flu that hit the world exactly a century ago. I started browsing black and white photos from around this time, and noticed people wearing masks on the streets. The Mona Lisa was one of the figures I chose to start with. In addition to photos of public figures, I have made modified copies of famous paintings such as the self-portrait of Frida Kahlo.

A play that is both fun and mysterious is the 100x130cm oil portrait of German politician Angela Merkel, clad in a red jacket against a darker red background. She looks serious and worried and the mask intensifies that image. The impact of portraits of politicians is particularly powerful. I felt Merkel’s power was diminished by the mask. She looks helpless and lost. “I wanted to send the message that even evil politicians like Golda Meir are afraid. Everyone is equal, ”says Bassiouny. And indeed, you can see Mao Zedong and Abraham Lincoln hinting that Covid-19 is a capitalist joint venture gone bad.

In addition to the portraits and paintings, there are over 30 ink-on-paper sketches showing the audience, including 1980s preacher Shiekh Sharawi, Nelson Mandela, Khomeini, and Gaddafi. They look strangely petty and insignificant.

Also notable are a number of acrylic paintings featuring key scenes from famous Egyptian films, such as the 200x150cm piece featuring Shadia and Mahmoud Morsi in She’e min Al-Khof (On Fear), and a 100×200 cm piece Mahmoud Al-Melegy in Al -Ard (The Earth), as well as Dalida in The Sixth Day by Youssef Chahine, on cholera. “All of these films were about fear – loss, death or disease,” he commented. Here as elsewhere, the images are beautifully executed but only in the form of replicas, with no changes other than the mask and gloves. 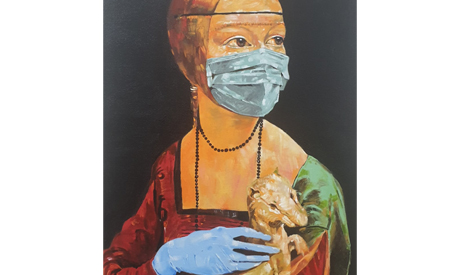 “My goal,” says Bassiouny, “is to document the situation from a different perspective and send the message that we all face fear and uncertainty alike. One exception is Toy, a 100x200cm acrylic painting on canvas, made earlier this year, of a doll in a colorful short dress wearing a mask and gloves. The painting is inspired by the artist’s career in the manufacture and trade of toys. 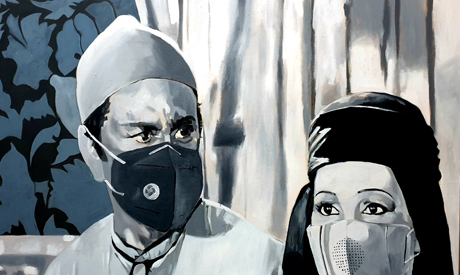 “I am not sure if I will develop this theme in my future work. I was infected again a few weeks ago while taking severe safety precautions. Personally, I don’t believe in the usefulness of wearing masks. I consider the mask to be an illusory symbol of separation.

Since no one could predict the time this deadly pandemic would end, the exhibit is on display indefinitely.

* A version of this article is published in the July 8, 2021 edition of Al-Ahram Weekly